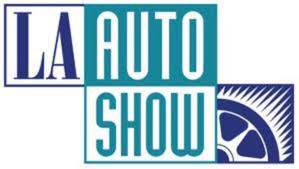 I love going to the auto show. As a kid growing up in the Detroit suburbs, it was an annual affair. I can still remember the excitement of seeing all the new models (both the 4-wheel and 2-leg versions), the lights, the music, the electricity in the air. These annual treks probably had as much to do with me being a "car guy" today as anything else.

After several years of not going to an auto show, I attended the Los Angeles Auto Show this past weekend. It was a quick visit squeezed into a busy weekend, but I gotta tell ya, the magic is still there. And while I'm a little older, a little wiser and a lot more cynical than the wide-eyed kid who used to attend the Detroit Auto Show, I'm no less enthralled by the spectacle of it all.

Part of it is the business aspect. I know firsthand what it costs to exhibit at a tradeshow, and to see what the auto companies have to spend to promote their brand and put their best foot forward to the public is amazing. And to think that the Los Angeles Auto Show is just one of several shows that the auto companies put on both in the US and overseas, we're talking millions and millions of dollars.

Then there's the pure glitz of it all. Highly polished cars under high wattage lights can have the same effect on your neck as Homer Simpson walking into a donut factory. Look over there; no, over here, wait, look over there! You can't help but get wrapped up in the excitement, which of course is exactly what the auto companies want us to feel. But more than that, they want us to then go out and buy a car. Or truck. Or van.

I love going to the auto show. What is it that you love? A show, fair, parade, team sport? Whatever it is, realize that without your support, it might not be here tomorrow. And that would be a shame.

Dave Goward, CEO of Roland DGA Corporation, has more than 35 years of sales, marketing and management experience, including 24 years in the sign and graphics industry and 16 years with Roland DGA Corp. He enjoys fine automobiles and good wine and hates oatmeal.

< Roland Restyling is "in a Relationship"
How to generate single line fonts for use with Dr. Engrave >

Saving PDF Files out of CorelDRAW to VersaWorks 6

'Twas the Personalization Before Christmas

Humidity and Sublimation – Not a Match Made in Heaven!