Every summer we head to Japan for what we affectionately call, Summer Camp. The similarity it has with most summer camps is that it's typically very hot & humid in Japan at this time of the year, about 85 degrees and 85% humidity!

Summer camp is an international gathering of Roland DG partners from around the world and a chance to see the latest products & technology from Roland DG Japan. It's also a chance to make or renew connections from around the world and share ideas about how to build the business, success stories and more. While there are 2-days of formal meetings, it's also in the hallways, at dinners, and while traveling together where we learn more from our international partners. 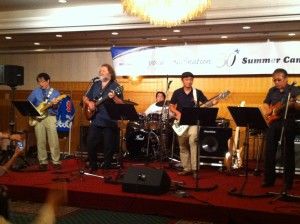 Mario joins the DG band for a rendition of "Vagabondo" 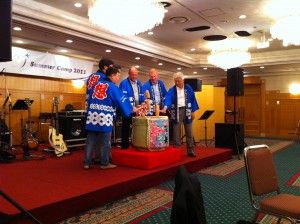 Ceremonial ‘smashing’ of the sake barrel

We also celebrated the 30th Anniversary of the company and had traditional Japanese ceremonies to commemorate the event. No celebration is complete without cake and of course, the Roland DG band with guest musicians from around the world.

To all the Roland DG JV’s & MD’s who attended – it was great to see you!

< Take the Time
You Need More Than One Cow >

How to Generate White or Gloss Special Colors in Versaworks