Continuing our mini-blog-series about the super talented people at Richard Childress Racing Graphics Center, Mitch Miller talked to Roland DGA about his twenty-year experience in graphics production and how Roland DG machines have powered quality output throughout his successful print production career. As Mitch Miller stands over a sheet of graphics, fresh off a Roland DG printer, with an X-Acto knife in hand, he carefully slices the sheets apart and sorts them into rolls for the RCR Center Graphics team to install on one of Richard Childress Racing’s (RCR’s) many racecars. Coming up on his seventh year as part of the team, Mitch has a critical production manager role for the RCR Graphics Center. He spoke to Roland DG about his major responsibilities.

"I oversee production and work orders, both commercial and in-house projects for RCR, making sure all the sheets are printed, laminated and ready to go, which ensures the installers are on schedule. I am also responsible for putting together the crash kits that go to the track each weekend.” 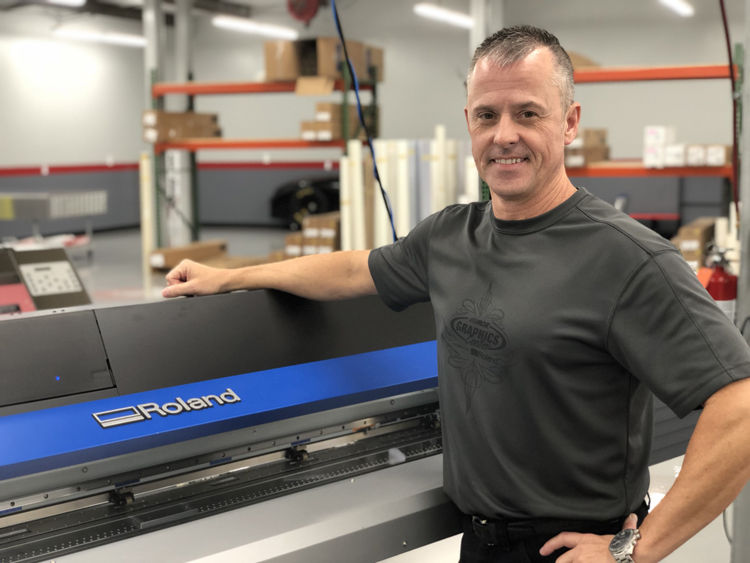 Prior to joining the RCR Graphic Center, Mitch told us how he worked in a variety of roles in motorsports and the automotive industry. He worked in a body shop, spent time at Roush Fenway Racing, Red Bull, and has been around the business of graphic production and installation since 1998.

After joining RCR Graphics Center. Mitch has worked closely with the design team of Kenneth Ward and PJ Brassard to take ideas and concepts and put  them into print. Once the graphic design aspect of a scheme is finalized by Ward or Brassard, Mitch takes the file and ensures everything is correct before sending it off to the Roland DG printers. Mitch described this process to us and how Roland DG printers have allowed RCR Graphics Center to operate on a 24-hour print basis during the NASCAR season.

“For the most part, when I get a file or an order I just go in, set everything up on the computer, look over the printers and ensure they are working properly and have enough ink, then print the file on our Roland DG printers. Pretty soon, those printers are going to be going twenty-four-seven as we prepare for the 2019 NASCAR season.” 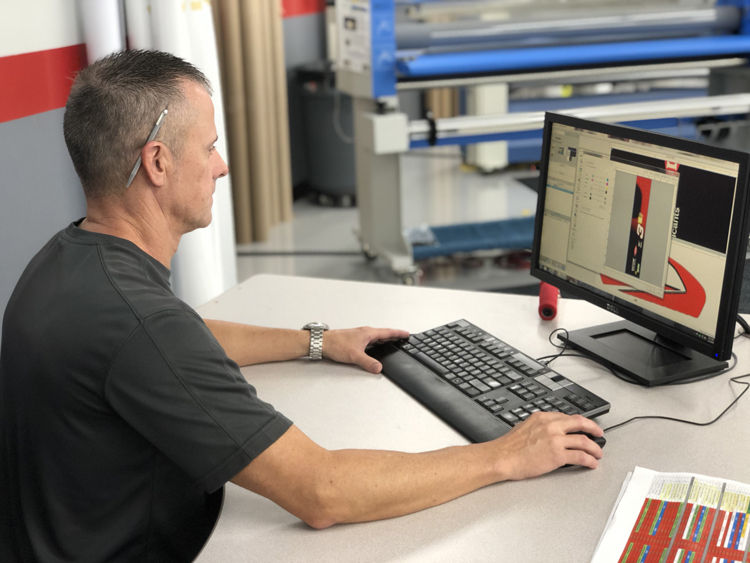 Mitch checks the file and ensures everything’s correct before sending it to a Roland DG printer.

Roland DG printers – which are almost always running – make Mitch’s job much easier and much more efficient, especially considering the high-volume and high-visibility of their finished product. Throughout his nearly seven years at the RCR Graphics Center, Mitch explained how he has used a number of Roland DG’s products and has never had an issue.

“I love Roland DG printers. They’re really good machines— easy to maintain and easy to perform weekly cleanings. Most importantly, they’re user-friendly. I have used HP’s in the past, Mimaki’s and even used Arizona printers, but they do not compare at all to Roland DG. If I were to have my own shop, I would definitely go with Roland DG, not only for their machines, but their company support and all-around resources.”

While the RCR Graphics Center handles both RCR and outside orders, Mitch estimates that he produces nearly 400 wraps a year for both the Xfinity Series and Monster Energy NASCAR Cup Series. Mitch described how the team at the RCR Graphics Center does an amazing job of balancing the RCR specific orders with those from outside vendors, thanks in large part to their Roland DG equipment.

“We do a lot of printing for outside orders at night. I can print a couple of cars throughout the day, pull them off, and set up the printers with more material and run that overnight. That way it is done in the morning and we can get them completed before we work on more car wraps the next day.” 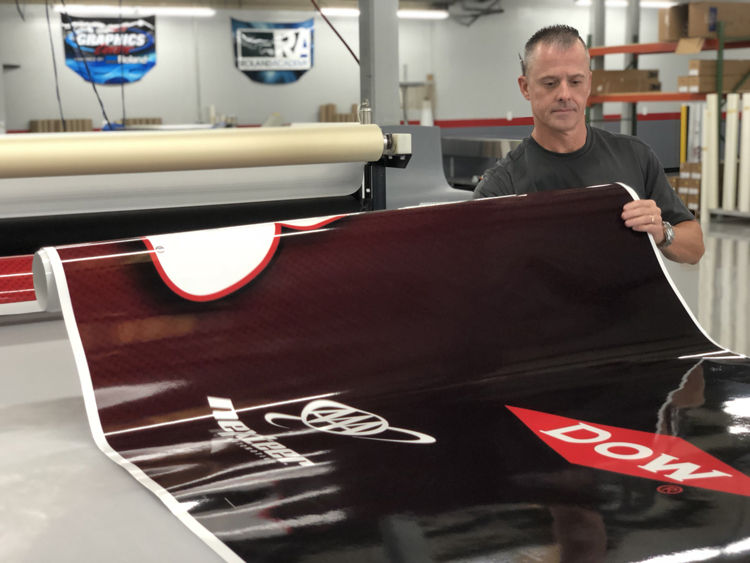 Mitch takes the wrap graphic off the Roland DG printer before laminating.

“We’ve had eco-solvent printers and we’ve even had some UV printers over the years.  All the Roland DG machines have performed excellently, and I’m really look forward to where Roland DG is going in the future with new features, such as the VG series Bluetooth tool that allows me to go home, pull up an app, and see where the ink levels are at any time. That’s really handy.Roland DG is going in the right direction for sure.” 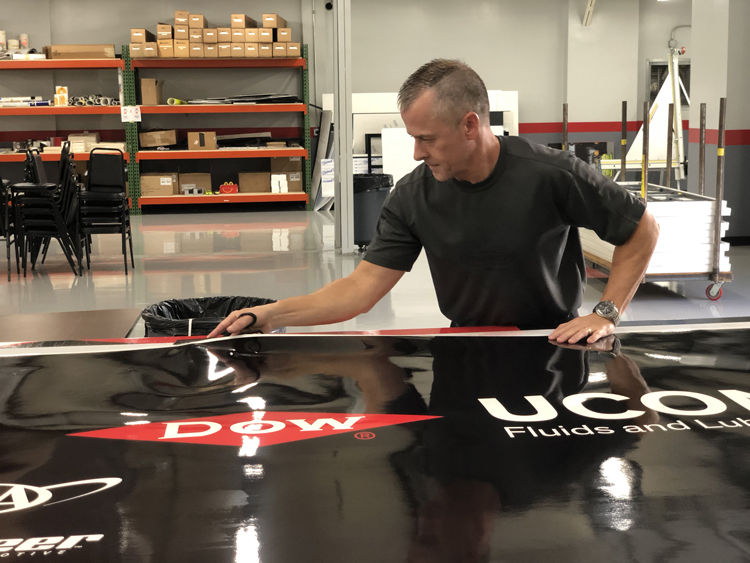 “One of my favorites was a throwback Yuengling car that Ty Dillon drove in the Xfinity Series during the 2014 season. That was one of my favorites to install. We have so many neat schemes that come through here. Dow comes up with some really cool stuff and you can’t go wrong with what Caterpillar comes up with. Some of the graphic design associated with those companies is pretty amazing to me.” 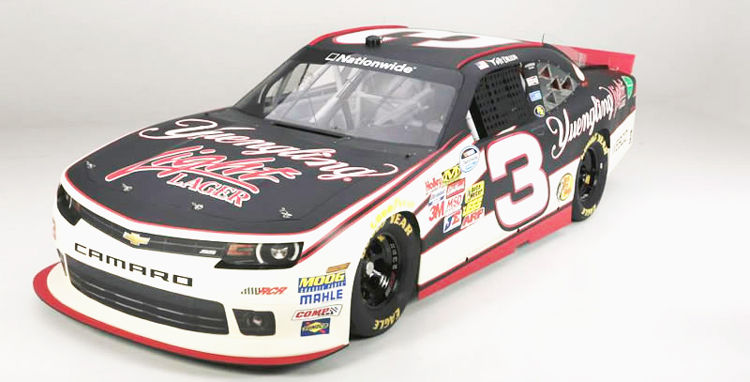 On this particular afternoon, Mitch was hard at work while another group was participating in one of the many Roland DG Academies hosted at the RCR Graphics Center. Mitch explains that these academies are a valued resource to anyone interested in working in graphic design, production and installation – regardless of whether or not they are involved in the racing side of the business.

“We like to help out when we have the time, because it is good to rub elbows with some of these guys. Some of them are experienced, some of them not so much, but that’s why they’re here, to learn the trade. It is really neat that Roland DG puts this academy on for the smaller sign shops.”

Mitch knows that not only is the hands-on training valuable for those in attendance, but also the ability to see everything the RCR Graphics Center has to offer. He offered the following advice to wrap beginners and attendees.

“A lot of attendees who join the academy and come through our facility are flabbergasted by what they see and all the amazing design, production and installation that we do here. It’s helpful for them to interact with us and take the opportunity to get answers to design and installation questions they may have. Sharing knowledge with the next generation of wrap professionals is very rewarding. The academies are good for the industry, good for Roland DG, and good for everyone.”