Wrapping for a Cure 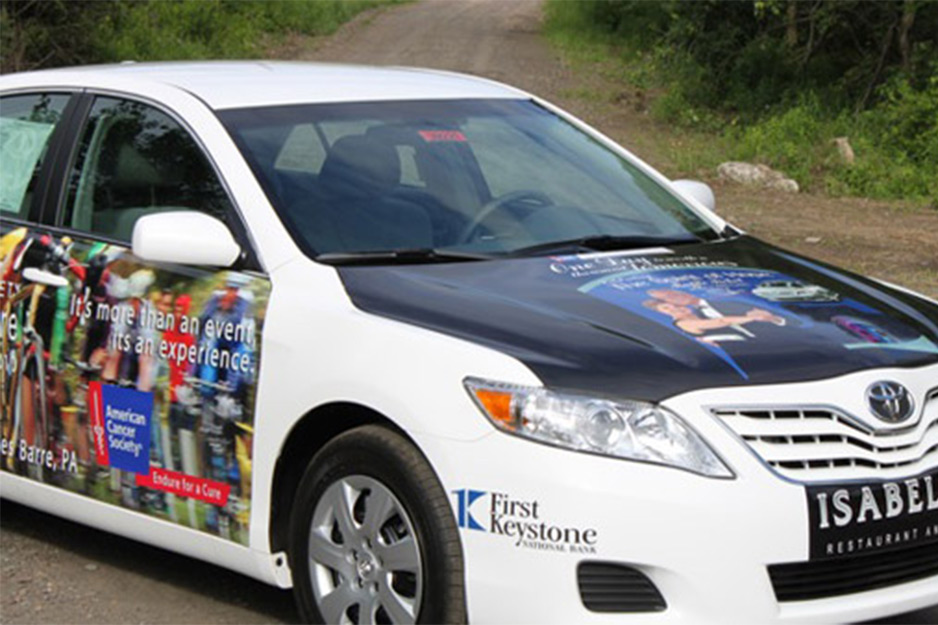 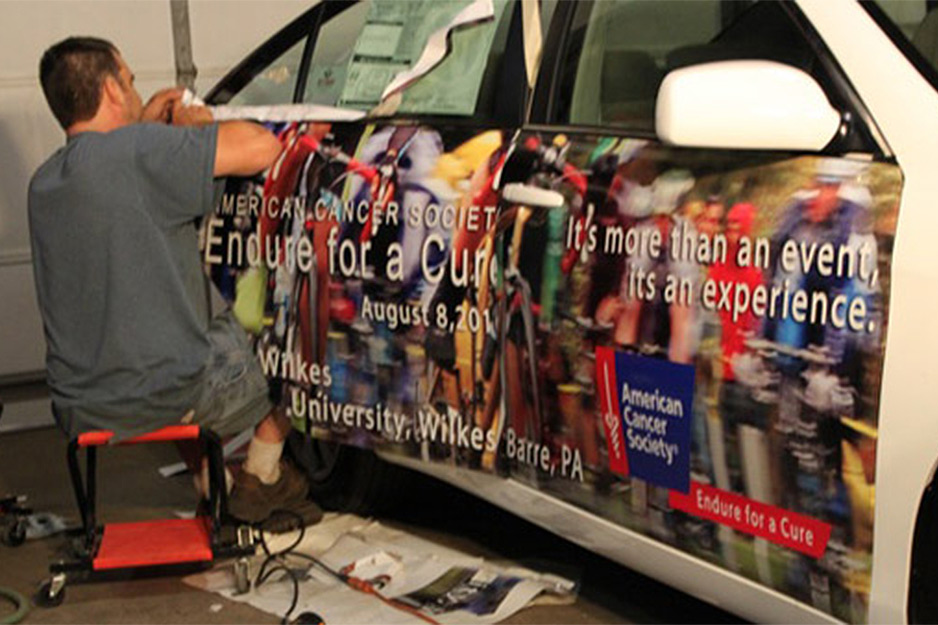 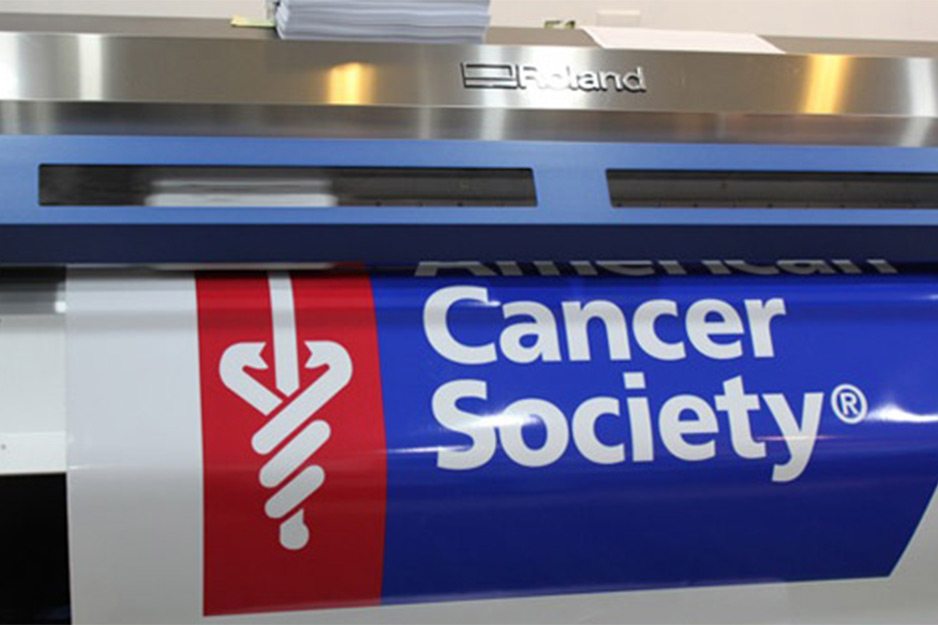 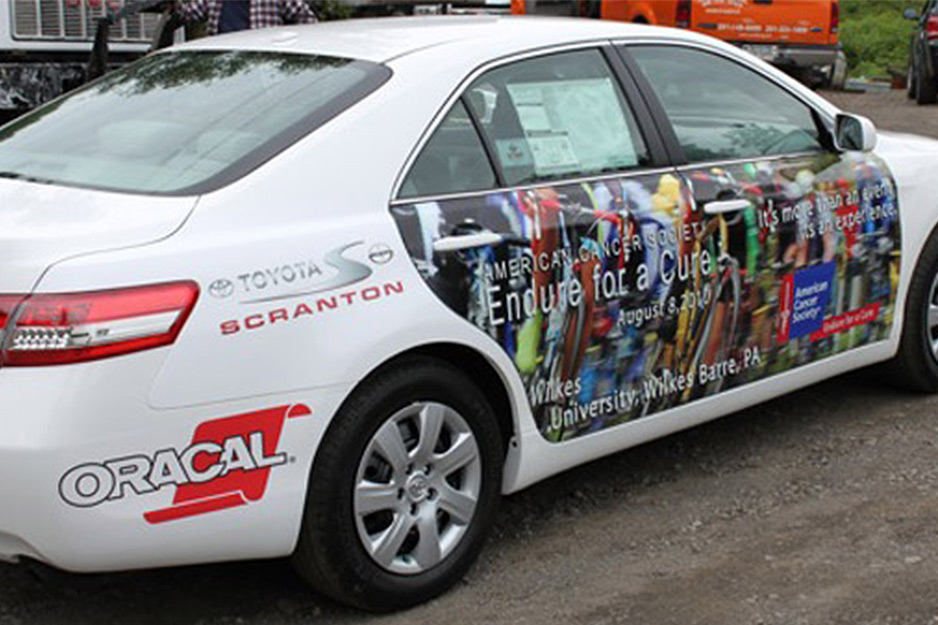 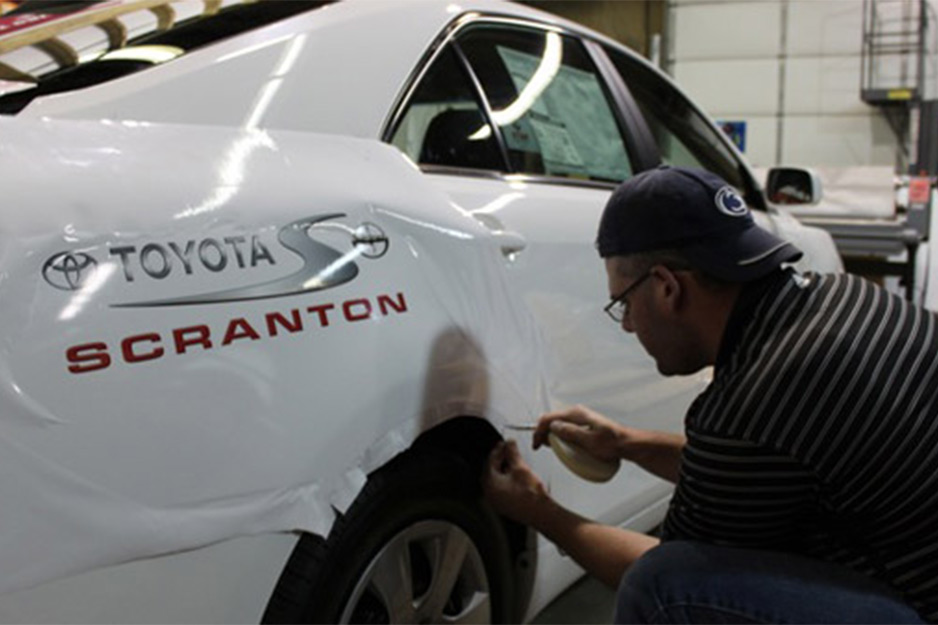 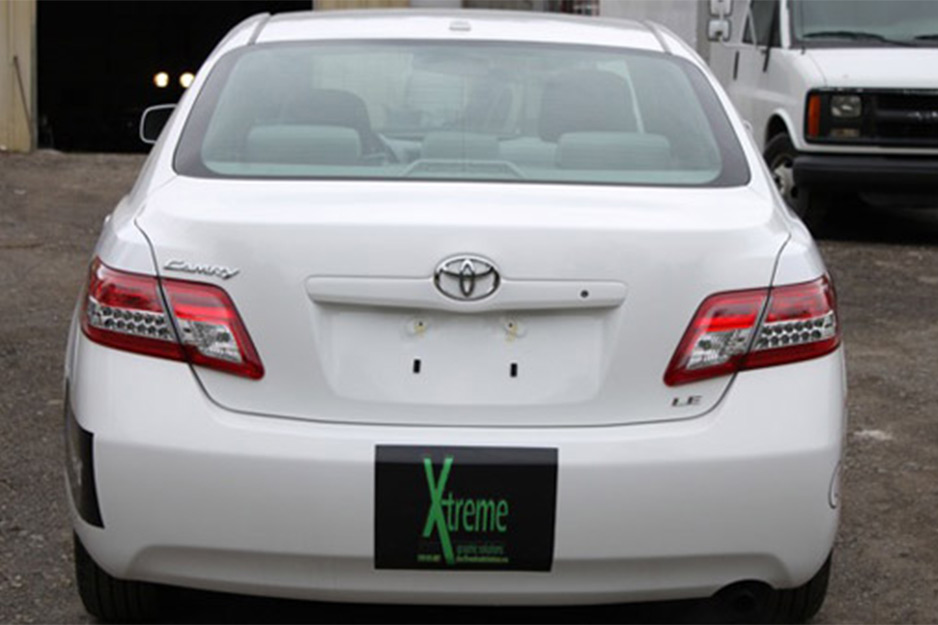 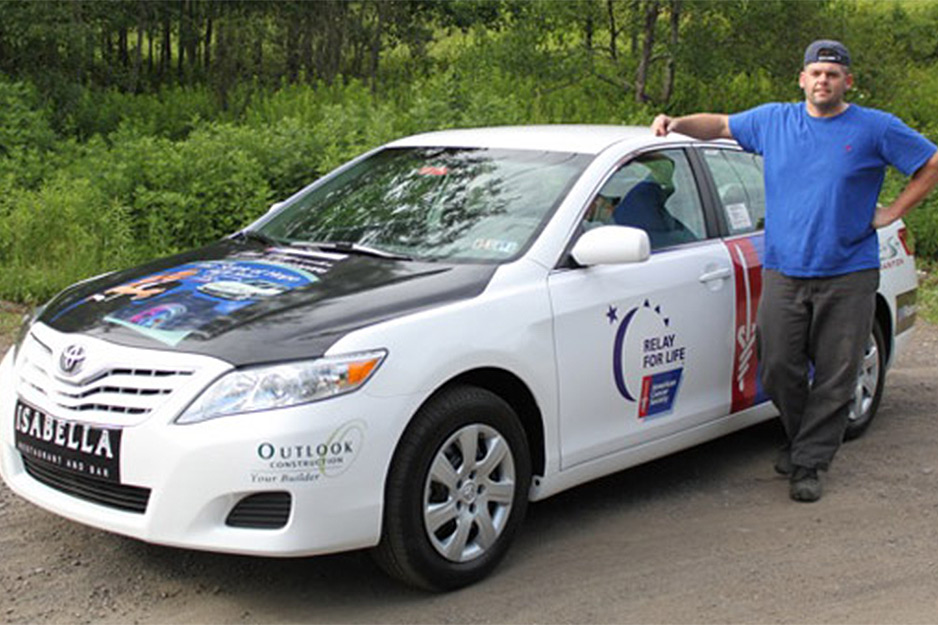 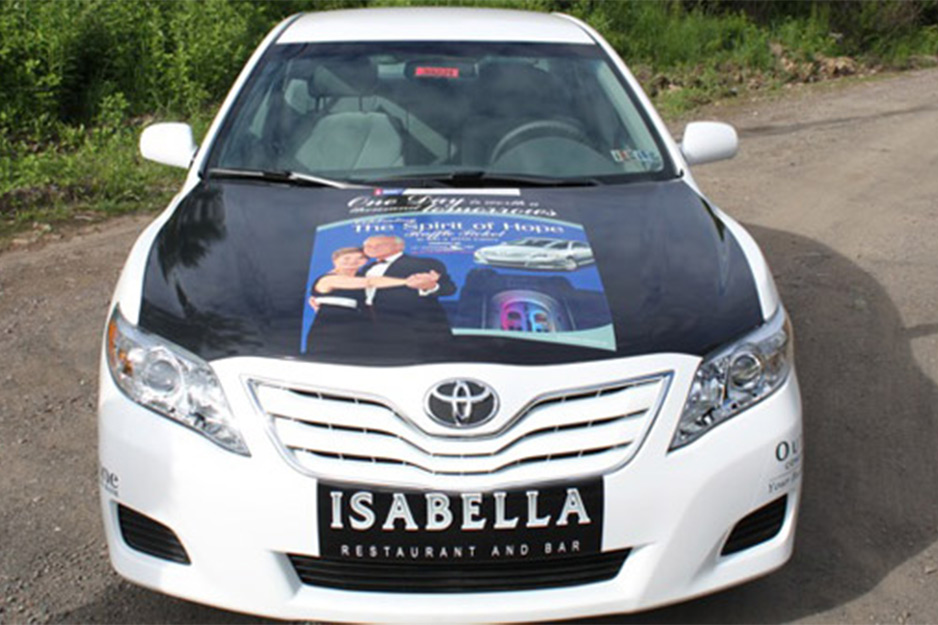 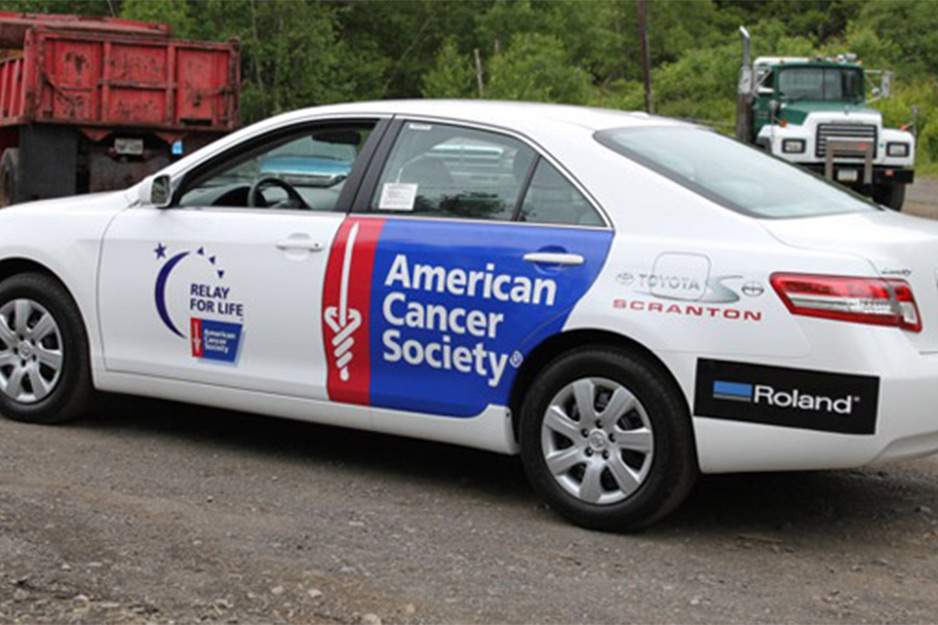 Scranton, Pennsylvania has recently become famous as the location for the hit television series, “The Office.” Plenty of businesses have their offices there, including several that recently collaborated to donate a fully wrapped car to the American Cancer Society.

“I kept hearing you can't go wrong with a Roland,” said Fazio. “Their strong reputation plus the print and cut feature were what sold me on the machine.”

"I kept hearing you can't go wrong with a Roland," said Fazio. "Their strong reputation plus the print and cut feature were what sold me on the machine."

Joe Fazio, owner of Xtreme Graphic Solutions, a full service sign shop in Scranton, and Rich Somers, head of Internet sales and business advertising for Toyota of Scranton, worked together to arrange this very special donation. “Almost everyone knows someone affected by cancer,” said Fazio. “The American Cancer Society is a great charity and we wanted to do what we could to help out.”

Fazio opened Xtreme Graphic Solutions and an online outlet, www.XtremeGraphicSolutions.com, in 2008. His shop specializes in all types of vehicle wraps as well as marine wraps, banners, signs and posters. They also produce “skins” for personal electronics such as phones, laptops and gaming devices. In addition, they are developing a line of seasonal and licensed image wall graphics.

Xtreme Graphics relies on a Roland SOLJET PRO III XC-540 54” digital printer/cutter to quickly and accurately print their graphics. Fazio researched the market extensively before deciding to purchase a Roland. “I kept hearing you can’t go wrong with a Roland,” said Fazio. “Their strong reputation plus the print and cut feature were what sold me on the machine.”

Fazio values the ease of use and functionality of his SOLJET. “You don’t need a four-year degree to use this machine,” said Fazio. “I was printing and cutting by myself in half an hour." He runs his machine continuously, producing wraps and banners as well as signage for local businesses. “Roland’s got such great technology that it’s hard not to make it work,” laughs Fazio. “You can print anything from a huge banner to a phone skin, and the colors always come out crisp and clear.”

Fazio and Somers worked together to design the wrap so that all the sponsor logos and the American Cancer Society’s logo and benefit race banner were placed for optimal viewing. Toyota of Scranton donated a 2011 Toyota Camry, a design so new that software companies had not yet issued templates for its revamped body lines and fender contours. “I had to work quickly to create a template from my own measurements,” said Fazio. “I got no sleep for two days, but it couldn’t have been for a better cause.”

When the graphics were resized, Fazio used Roland’s VersaWorks software to RIP the designs and print them on the SOLJET. He and his staff then installed the wrap. “We got lots of compliments on it,” said Fazio. “People liked the quality of the graphics and the brilliant colors.”

The fully wrapped vehicle was rotated among the local sponsors for six months, and will be raffled off at a gala event held at the Masonic Temple in Scranton. This year’s sponsors include Isabella’s Restaurant, Outlook Builders, First Look Bank, and Roland DGA. The car was also shown at various charity events benefitting the American Cancer Society such as the Race for the Cure.

“With digital printing, the possibilities are endless,” said Fazio. “You can print wraps to advertise your latest products, or you can benefit a great cause like the American Cancer Society. It’s all in a day’s work.”