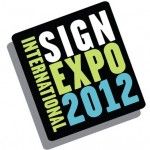 ISA, our biggest show of the year, came early this year and we had a good show! We won 3 awards for top products: LEJ-640 & Matte & Glossy Backlit Film. Attendance was similar to 2-years ago when were previously in Orlando, but we had a bigger booth, more products, got more leads and do what we do best – put on a bigger & better show every year.

We had a new “Steampunk” wrap on the Kia, which got great compliments during the show. Our 30th Anniversary contest yielded over 1,100 examples of work done on Roland DG equipment, which we were able to showcase in our booth and on massive floor graphics at the entrance to the show. In addition, we were able to ‘preview’ our new RE-640, announced DOUBLE the speed on our VersaStudio BN-20 and officially launched white ink our VersaStudio BN-20, and VS-Series printers. Promos on BN-20, VS-540/640, RS-640 and more helped keep the buzz at a high level. 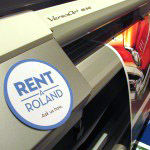 In an industry first, we also launched an equipment rental program, which generated interest from customers, dealers and the press. We’ll see where this goes, but early indications are it’s accomplishing our goal of helping customers get into business easily. Along the same vein, we partnered with Keen Systems, who can help Roland DG owners get their businesses online and transform them from local to global (or at least national) businesses.

To make all this happen took the hard work of nearly every person at Roland DG and that’s what it takes to live up to the high expectations of an industry-leading company. To be recognized by our customers in the form of a 2012 Wide Format Imaging Award for 3 products: VersaUV LEJ-640, Glossy Backlit Film, & Matte Backlit Film, is always a great honor. So, in all it was a successful show and, while we’re still following up on items from this year’s ISA, we’re already gearing up for next year. Make sure to be in Las Vegas, April 4-6! You might even get a chance to see ISA’s President, Lori Anderson planking and/or “Supermanning.”

< Off to Japan
How to Make Mistakes Right >