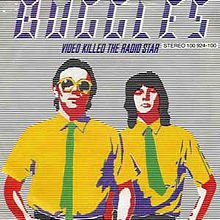 If you grew up around the same time I did, you probably know that this 1979 song from the Buggles is the answer to a trivia question. The trivia question is, of course, “What was the first video ever played on MTV?” The song came to mind after a recent phone conversation I had with someone from a major consumer electronics company who called to talk about the promotional value of building wraps. As we were talking, I wanted to show him some good examples of work, and immediately thought of Off the Wall Signs, a Roland DG user in Las Vegas that specializes in the application. For the first time that I can remember, I didn’t bother to direct him to a corporate website, but rather directly to YouTube, where Off the Wall has a page. They have a very nice website, but have made their videos such an integral part of the their promotional strategy that a potential customer could get all the information they need just by going to YouTube.

I think that moment was significant. Not man walking on the moon or fall of the Berlin Wall significant, but as a marketer it made me think. We’ve been putting a lot of time and effort into generating video here at Roland DG, and the rest of the online world has too. If you aren’t, I’d suggest that it is a good way to showcase your work and capabilities. Numerous studies have shown that potential customers and partners are more likely to react to a video than almost any other form of content. I’m sure most of you have a website, but how many of you have a YouTube channel, or videos embedded in your site? Roland DGA TV has rapidly become one of the most popular sections of Roland DG’s site, but we’ve noticed that more and more users are simply headed straight to YouTube to find our content. For mobile device users, the trend is even more startling, since dedicated YouTube apps often make it easier to just search there rather than go through a browser at all.

Think about your own habits on the internet at this point. How much of your news do you watch vs. read? Are you doing most of your viewing at a PC, or on a mbole device or tablet? Do you read manuals, or go looking for tutorial videos? I was installing blinds the other day and needed to shorten them. The one page instructions split into 8 different languages was useless. On the other hand, the manufacturer had a great video that took me through it step-by-step. I perched my iPad on the window sill and just followed along. If you’re more likely to watch a video than read a webpage, your customers probably are too.

Roland DG users are creative professionals who make amazing finished products, often using complex multi-step processes. Video can be a great way to get buyers engaged in the process, and to get them understand the craftsmanship, care, and effort that goes into that sign, trophy, dental implant, or promotional product. They can also help build relationships by creating a personality for your business that it might be impossible to convey in text.

So, has video “killed” traditional web marketing? No, but there’s clearly an evolution taking place in how web users are consuming content, and with the cost and difficulty of high quality production dropping, we all need to be conscious of the shift. I’d really like to see some of your video work, or hear how you’re using YouTube and other tools for promotion, so please share links in the comments.

< The Olympics Are Over, But The Competition Continues
We like Dr. Seuss at Roland DGA >